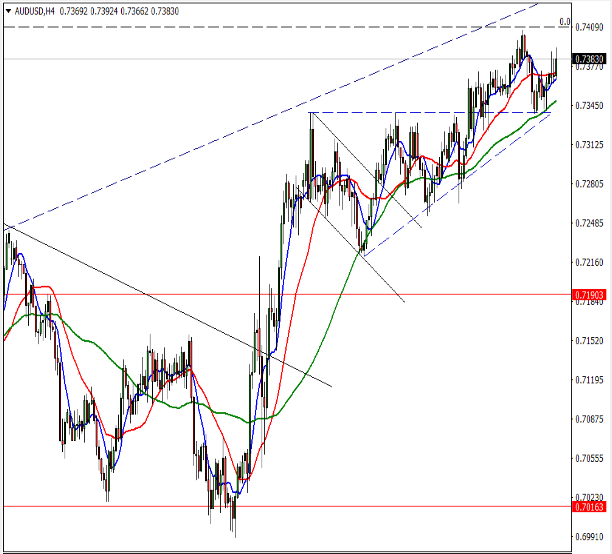 The Australian dollar fluctuated in a narrow range sloping upward during the Asian session to witness its stability near its high since the beginning of September against the US dollar, following the economic developments and data that they followed on the Australian economy and on the cusp of economic developments and data expected today, Wednesday, by the US economy, the largest economy in The world, which includes the testimony of Federal Reserve Governor Jerome Powell before Congress about the lending program to cope with emergency epidemics.

We have followed up on the Governor of the Reserve Bank of Australia, Philip Lowe, in his testimony before the Standing Committee for the Economy in the Australian House of Representatives in Canberra, that the Australian Central Bank has turned around a turning point in the economy, explaining that the economic expectations are significantly better than three months ago, but that it is likely to reach Unemployment rates are at their top in the 7% range, adding that people will likely continue to take a more careful approach to borrowing than they did before the Corona pandemic, and amid its assertion that the Reserve Bank of Australia is willing to do more if needed.

On the other hand, investors are currently awaiting the US economy to reveal preliminary data for the labor market, with the release of the index of change in private-sector jobs, which may reflect the acceleration of job creation to 433 thousand jobs compared to 365 thousand jobs last October, hours before The disclosure on Friday of the monthly report for jobs other than agricultural and unemployment rates, in addition to the average hourly income for the past month.

This comes before we witness the speech of Deputy Governor of the Federal Reserve and a member of the Federal Open Market Committee, Ratdall Quarles, about financial regulation at the Financial Times Global Digital Banking Conference, and before the second half of the Fed Governor Jerome Powell’s testimony about the “CARES” law before the Financial Services Committee. In the House of Representatives, after delivering the first half of his testimony yesterday before the Senate Banking Committee.

All the way to the talk of a member of the Federal Open Market Committee and the President of the New York Federal Reserve, John Williams, about the economic effects of the coronavirus in a webinar hosted by the Federal Reserve Bank in New York, before we witness the Federal Reserve’s disclosure of the report of the Big Book, whose importance lies in being issued before Two weeks after the FOMC meeting, which is scheduled for 15-16 this month.

The Australian dollar against the US dollar returned to the upside after retesting the 0.7335 level, which supports the continuation of our bullish expectations, which get continuous support from the MA 50, with a reminder that our awaited targets start at 0.7413 and extend to 0.7530.

On the other hand, we should note that the continuation of the expected bullish wave depends on stability above 0.7335.

The expected trading range for today is between 0.7335 support and 0.7460 resistance