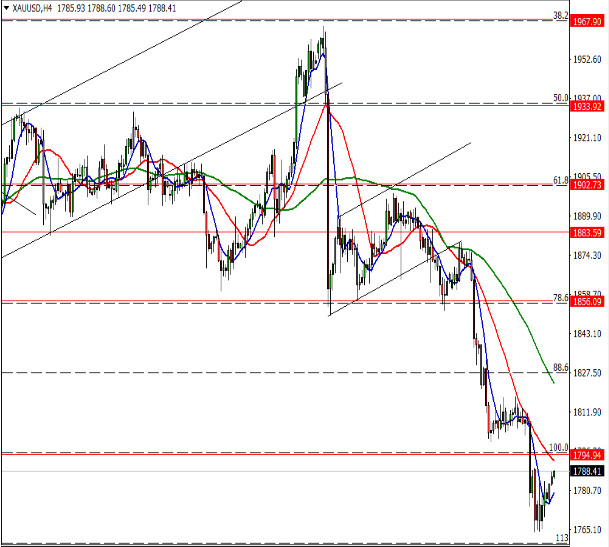 Futures contracts for gold prices fluctuated in a narrow range slanting to an upward trend during the Asian session, to witness their rebound to the second session from its lowest since the second of July, overlooking the negative stability of the US dollar index near its lowest in more than two and a half years according to the inverse relationship between them on the cusp of developments And economic data expected today, Tuesday, by the US economy, the largest economy in the world, which includes the testimony of Federal Reserve Governor Jerome Powell to Congress about the lending program to cope with emergency epidemics.

The markets are looking forward to unveiling the final reading of the manufacturing PMI by Markit from the United States, which may reflect the stability of the expansion at a value of 56.7, unchanged from the initial reading for the month of November and compared to 53.4 in October, before we witness from Before the US economy was released, the construction spending index reading, which shows an acceleration of growth to 8.0%, compared to 0.3% last September.

This comes in conjunction with the disclosure by the largest industrial country in the world about the reading of the Industrial Supply Institute index, which may show a decrease in the expansion to a value of 57.9 compared to 59.3 in the previous reading for the month of October, and the reading of the same index measured by prices may show that the expansion has decreased to It was worth 65.0, compared to 65.5 in October.

This also coincides with the start of the testimony of Federal Reserve Governor Jerome Powell before Congress in both houses of the House of Representatives and Senate in Washington today and tomorrow Wednesday regarding the “CARES” law, and this comes hours after the Federal Reserve announced that the liquidity facility program for commercial papers, money markets and major traders will be extended. And the payroll check protection program until the end of March 2021.

We would like to point out that the Federal Reserve made it clear in its statement yesterday that these programs are separate from the credit facilities that the US Treasury Department recently ordered to close by the end of this month, and it is reported that Treasury Secretary Stephen Mnuchin sent a message last month to Federal Reserve Governor Powell stating that the amount of $ 455 billion The CARES appropriation must be available to Congress for reallocation.

In the same context, the Federal Reserve had previously issued a statement stating that it “prefers that the entire group of emergency facilities that were established during the Corona pandemic continue to play an important role as a support for our economy, which is still suffering from stress and weakness,” and this came within the Federal’s work on Reassure financial markets and investors that credit will remain available to help companies, local agencies, and even non-profit organizations during the pandemic.

We would like to point out that some of the report recently indicated the possibility that monetary policy makers at the Federal Reserve will expand the adoption of monetary stimulus during the current December meeting, especially after announcing that it will comply with the Treasury’s request to return unused funds. Otherwise, investors are also looking to Later this week, the US labor market data for November was revealed.

Gold price found strong support at 1765.00, to bounce up and head towards achieving expected gains on the intraday basis, and by carefully looking at the chart, we find that the price has completed forming a bullish pattern, which means that opportunities are available to achieve positive targets beyond 1794.84 to reach 1805.00.

Thus, the bullish bias will be expected for today, taking into consideration that a breach of 1780.00 will stop the suggested positive scenario and pressurize the price to resume the main bearish trend again.

How to setup a effective mt4 platform